The Gansey or Guernsey was the main garment for fishermen throughout the British Isles from the 15th century up to the early part of the 19th century. They were also very likely used by crew on large voyages to South America as our Williams crew would have done.

The Gansey was the mainstay of the Guernsey knitting industry and was made from wool imported from England. It is very likely that they were made locally around the British coast by fishing communities.

The Gansey came into being as a garment for fishermen who required warm comfortable yet hardwearing clothing that could repel sea spray. The hard twist given to the tightly packed wool fibres in the spinning process and tightly knitted stitches produced a finish that could repel water.

The Williams Gansey Project started in May 2016 in response to identifying authentic clothing that the original expedition may have worn. The project leaders are Janice Snowball and Astrid Adams, who are both from Blyth, Northumberland and have knitted for most of their lives.

They researched the background of the Gansey and having established that there was no record of a  ‘Blyth’ Gansey,  developed a pattern specifically designed for the crew who will sail around Britain and are undertake the voyage to Antarctica in 2019.

After fundraising for wool, needles and expenses, experienced volunteer knitters have been selected from a phenomenal number of applicants. The design includes contemporary features such as the logo of the Blyth Tall Ship Project and the Northumberland Flag.

Knitters have been invited to add their name to the Gansey on a label that is provided so that the crew member will know who knitted it.

Crew members will be encouraged to contact the knitter of their Gansey at least twice during their leg of the voyage.

The wool is 5 ply Gansey wool, supplied by Frangipani, based in Penzance in Cornwall. 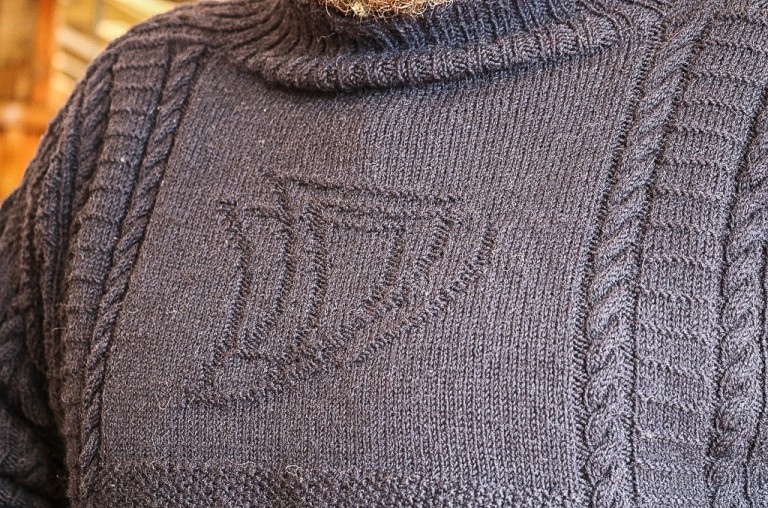